He Came, He Sat, He Conquered My Heart

June 15, 2016
It took more than a year for me to present this wonderful friend to the whole world through my blog. He was like any stranger when we met on Ganga river’s ghat at Howrah. Those days, I was going through ups and downs in my life. I hope you all are familiar with the story of sour grapes. Whatever I did wasn’t bearing a fruit. Neither blogging, nor digital marketing, or anything. Personally or professionally, it was a hard time. I used to roam around in search of a peaceful place in my city, where no one knows me so that I can sit back, relax and talk to myself in search of answers. And what could have been more soothing than river side on a summer noon. So I went to this place, near Bangeshwar Mahadev temple where 51 feet tall Lord Shiva’s statue is resting. The Ganges ghat I am talking about is the one just opposite to Kolkata’s famous Bhuthnath temple, which falls on Salkia School Road, the lane in which Salkia AS High School is established. It was like a half day for me from office as nothing productive was my way that day. I entered that Ganga ghat as usual, did pranaam in front of the temples located on both side of the ghat’s entrance. Everything was just normal when I entered, people were bathing and washing clothes and utensils in river water. I moved ahead down the stairs towards the caucus meant to sit on both sides of the ghat, though I prefered the cleaner one, the left one, so that I can see Howrah Bridge and Bhootnath mandir from the same place. I sat onto the bandstand, suddenly my smartphone rang. It was a call from my elder brother who prefered to ask me whether am I getting married that year or not. ‘Marriage?’, I said to myself while nodding in yes to his answers as nothing was in my mind except peace and solace for thoughtful moment. I just wanted to perform a samudra-manthan (churning of the oceans) comprising my past, present and future as I used to think more of future than living in present while keeping the past at bay.

Thanks to this little Julius Caesar, as he came, he saw me, he sat on my shoulders, he conquered my heart. 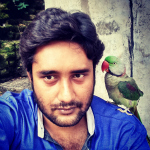 I don’t even know his name, neither do he knows mine, but the way he approached me for a forceful friendship was super cute. Let me call him by a familiar name ‘Mithoo’ as he was non other than a pet bird, an Indian ringneck parrot scientifically named as ‘P.K. manillensis. I always had a fantasy to care for a pet like an Indian rose-ringed parakeet and this wish came true when he initiated for a friendship himself. What happened was unscheduled for me, but might have been a regular schedule for him. I can recall that he came sitting on the shoulders of that guy, who I think was his master/trainer/owner. He was a pet parrot, still hesitant to speak as he didn’t utter a word throughout the time he was in my company. His master, by looks meant to be a local guy who works as a labourer in any nearby industry. He came to have bath in river ganges which was his daily routine at the same ghat I am talking about. Along with him was Mithoo, silent yet playful. Who loves nodding his head to see familiar and unfamiliar faces around him, may be that was animal instinct to judge/greet others or so. His master politely landed him on the other side of the bandstand in which I was sitting on the other end. I was curious to check what will he do next, didn’t he also want to have a bath in this holy water or will he try to chew his master’s clothes which he was meant to guard? Several questions were popping up in my mind while I was busy on the phone call. All of a sudden, my smartphone beeped quoting me that battery was low to 15% merely. I asked my elder brother to hang up for the same reason as I have to complete the whole day with the same battery life. As soon as he disconnected the call, I saw Mithoo moving up on the bandstand caucus on which his master left onto the bottom end. He overtook an old man, local obviously, who also came to have a dip in the river. I thought he would pick up that old man’s fresh clothes that he bought to wear after bathing. But hell, he left that too and was moving towards me. I was wearing a deep blue shirt and jeans, a new pair I started wearing since a month. My forecasting warned me that Mithoo is either coming to chew my clothes or to bite me as I was looking just out of the league, who was not bathing but sitting in a relaxed position on the ghat. He neared me, took the bottom part of my shirt in his mouth and started jumping. I was surprisingly shocked in fear, as I was going through hay days, only negative thoughts came out regarding that cute little green bird. Stuffs like, what if he bites me, Do I need to get at least 2 injections for that? What if he tries to bite my fingers, It would be painful as these birds are hardcore green chilly eaters and so on. Suddenly, I heard someone guiding me in an adenoidal voice, ‘No to fear, he never harms’. I turned my head and attention towards that voice, he was same old man whom Mithoo overtook before coming my way. I calmed myself down as guided by him. As soon as I sat strongly without moving my body in fear, Mithoo started doing the same stuff again. He took my shirt in his mouth, tried to make a jump and hell yeah, he was four inches above the ground onto my belly, then a move again to chew off my shirt and he started hanging holding my collar in his mouth. But "Dilli Dur Hai" kind of feeling haunted him and he jumped onto the slab again.

Once again he repeated the same stuff and this time with an extra step he climbed up the ladder, onto my shoulder through my shirt. Wow, that was a amazing feel for me, no one except my family would have needed so much of my attention & relaxation on my shoulders, but look at Mithoo, he is happy to be here on the top. Sometimes smelling my hair, sometimes chewing them and that too bravely sitting on my shoulders. I let him do whatever he wanted to do in that short span of time until his master baths.
His consistent tries to climb up my body and that enthusiasm to do what he loves did teach me a lot. His behaviours were tickling me, I rose up to smile though I was in a mood to cry. His meaningless pricking and chewing buttons were animal curiosity towards human to human, but I thoroughly loved his company for the next 20 minutes, and during these minutes, my smartphone's 15% battery gave a long lasting memory, I clicked selfies with him, a selfie video is also embedded below. Don't forget to see the happiness on my face in that video, he overturned my Emotional quotient.
When I shared these pictures with some of my friends, they speculated that some people make their pets addicted to drugs, thus they don't want to leave their company, if his master is not available, he will not fly but would love to do the same stuffs, in this case, sitting on the shoulders of a stranger. I felt sad to imagine a drug addict Indian rose-ring necked parrot. Though I tried to meet Mithoo Parrot again and again by visiting that Ganga Ghat,but my and his master's timings never collided and then I never saw him again.

November 07, 2011
Picture courtesy-Internet Now a days,every person's life is so busy and so hectic that we do not get time for other things.Even we do not get much time to complete our pending works on the same day or other day.In this way,the pending works get clotted and becomes a huge mountain to climb upon .          I was thinking that in these busy hours of work or study,if I get two more extra hours in a day, what will I do ?         Whether I will spend them in completing my pending works of getting a new Ration Card,as we have from shifted from the rented house to our own home on the other side of the town,or will I go to meet some of my friends and relatives with whom I never find time to meet,though they are in the same town .        I have got other options also to spend my time,like meeting and having fun with my old classmates hovering around Kolkata or visiting my old area & meeting those peoples who were with us in that rented colony since the time I opened my eyes as
9 comments
Read More