Janak Kumar Yadav
April 17, 2012
I just had left my BPO job back in April 2009. All that I had that time was a Hero Devil Bicycle and long distance journeys to cover on that. I insisted Papa to help me in purchasing my 1st bike. I had my saved salary around 44K and asked Papa to pay me rest so that I can get one. Papa agreed with me, but I was confused with the options I was getting in the market. It was my 1st major buying decision. I had to take care of Brand, quality, Service center, color of Bike,etc. So, Finally purchased Honda Stunner after consulting with my friends and my heart, while unlistening to them who were against my decision. Because I loved my bike in the first instance when I saw one in showroom. I opted for a  different color and that too yellow. 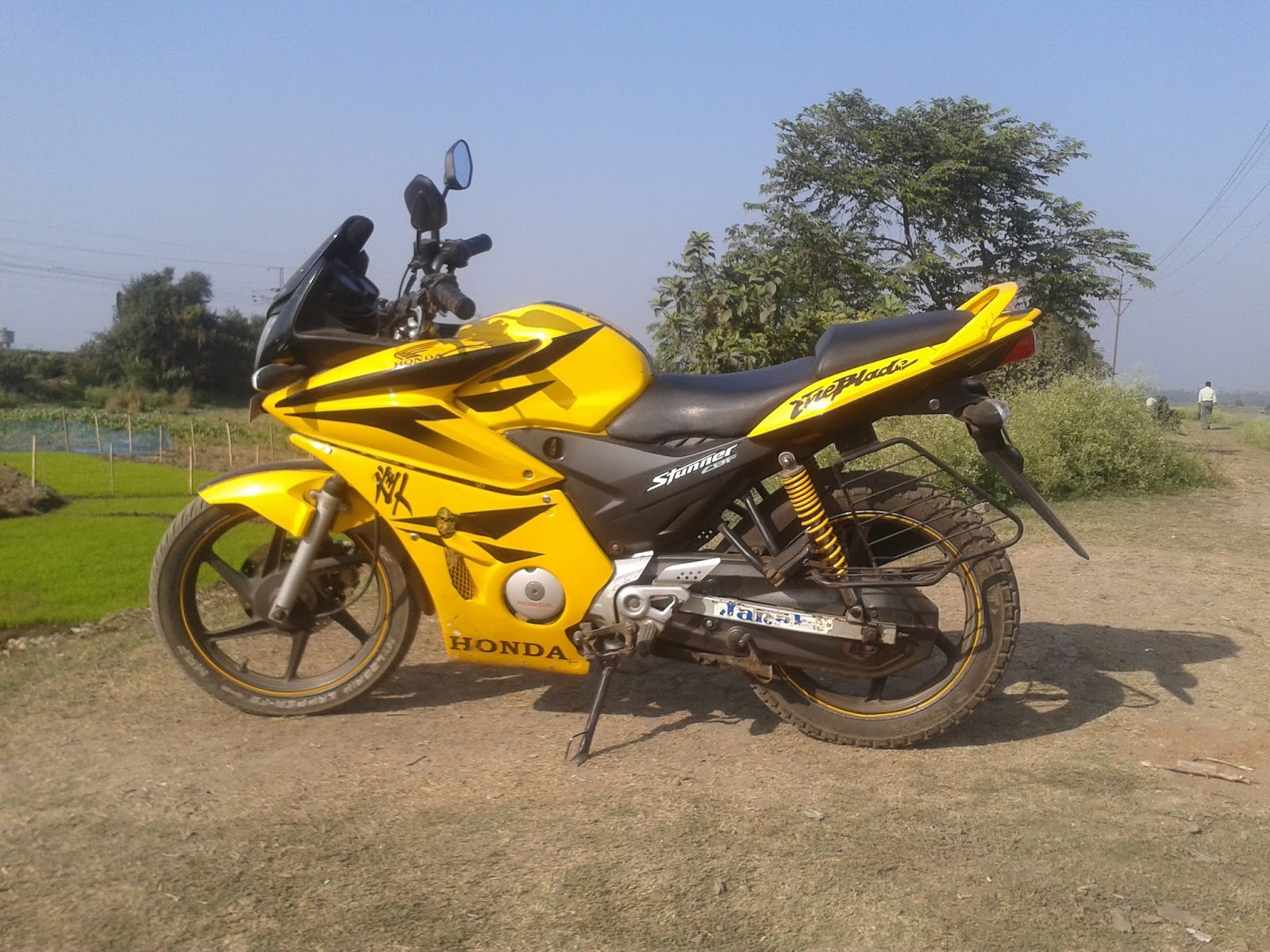 I din't knew much about how to go there but I knew only one thing that if I will go there,I will get that special Tarka-Roti and that too on a Dhaba like style on either a 'Khaat' or 'Wooden Palang'. None of us were aware of the location as we visited there only when we went to Digha for any vacations and that too by car.

Going there by Bike was not so easy. We were excited, but din't knew the path, din't knew how longer will it take there to reach, din't knew how many Kilometres away is it from home, din't knew about the Highways and people around it. The person who suggested, Bappa, he even din't even knew anything more than us. Neither anyone among all 20 boys were yelling their heads positively.. Later He said- 'Chal na yaar,dekha jayega!'

Everybody was ready but looking in each others eyes and asking silently whether to move ahead or not. Chotu aka Nachaniya (as he is a good dancer,just nicknamed it) said in reply to Bappa- "Sab ghar pe phone kar do ke aaj Bappa ka janmdin hai,aney me time lagega!"

All of a sudden, all us took our mobiles and called back home saying the same as suggested by Chottu like we were ready for it and was just waiting for somebody's support. It was 12.15pm. We took our bike, went towards the National Highways NH6 and rode away towards the direction where Bappa was going.

10 bikes and 20 boys were on the way to 'Sher-E-Punjab Dhaba'. As we all know, where there is bike and bikers there will be racking kind of stuffs and that small race of being ahead,etc. We were moving slowly following Bappa and he was riding like someone is chasing him. My bike was just 3 months old and have not gone through the 4th servicing. Thus, I was not taking risk to race with it as there were chances of burning my Bike's Clutch plate. As a result,none of our friends treied to catch him up and he then has to stop a KM or two away. Waits there till we reach there.  Again,tooks his Bajaj Pulsar and rides away. We, on the contrary were enjoying the ride on Highway with the minimun safe speed.

After crossing 25 odd kilometres and moving far away from home,we realized that we should ask someone how long is the this dhaba to reach. We haulted at Baksara,asked a passerby and was stunned to listen to him. He said- 'Bhaijaan,abhi bhi 2-3 ghanta lagega'. We were in a state of chaos,some were telling to return back as it is already 1.30 pm and there is still 2-3 hours journey left for that mere Tarka-Roti. Some suggested to get back to another nearby dhaba and have supper there if anyone wants to.

And some were busy in laughing and enjoying the situation and criticizing Bappa for his idea. The chaos ended after we decided to move forward inspite of the long journey. My speech played a vital role in setting down the choas. I said to them- "Jo hua so hua,bhul jao. Itne dur agaye ho to agaye ki taraf chalte hain. Humlog paidal thore he hain....Hum log Bike pe hain...aaram se ghar pahuch jaenge"

But I didn't knew that my words will be painfull for someone else. After half an hour, Bappa's Bike Broke down due to heat, followed by Lucky's Bike which drank up petrol like nothing. We got a break, stood aside on Highways. Lit up a fag, waited for others to come who moved ahead in a hurry. There was not a Petrol pump for the next 10 Kilometres. Yes, we were far away from Kolkata and it was a rural area. Someone bought a local mineral water bottle, we all emptied it and then he and Lucky drove ahead in search of Petrol.

After a hault of 30 minutes, we started our journey and this time everybody was moving slowly as they have learnt lesson. While in all this we din't have seen the time.It was 4pm. In curiosity we asked passerby the same question that we asked the last one. His reply was heartedly accepted as he said that the Dhaba is just 30 mintutes away. What a sigh of relief we got! We were at Dhulagarh which is near Haldia, West Bengal's Industrial belt.

We never imagined that we will go to Haldia anyday, that to on Bike. The roads were damaged and under construction. Being an industrial belt, Trucks and heavy carriage vehicles were wrestling with the roads.  What we noticed ahead was a massive road jam. We were filled with negative thoughts of what to do, move ahead or not. Thinking of our bikes, and being confident we moved ahead. Wrestled with the massive Road-Jam & protests from local people as some Truck has hit some Bike-wallah, who died on spot. Somehow managed to move ahead crossing those small ways between vehicles in the Jam.

Finally we reached 'Sher-E-Punjab Dhaba' at Kolaghat near Digha and it was a tiresome journey followed by some rest and gossip outside the Dhaba. It was 6 pm,it took us 6 hours to reach there and 80 Kilometres one way journey.


Yes, it may seem foolish and idiotic to do this it sort of journey for Tarka-Roti. But being a foodie and adventurer, it was an awesome experience after all.

But, after that 2009's programme, no one dared to accompany me or go there only on the bike. Seems like they have either become responsible or learned a lesson. Last, but not the least, it took 5 hours for us to return back home and we reached home at 1am. We also enjoyed in return journey driving bike at night on NH6, but that is a different story.

Now tell me, What is your adventure story?

ha ha ha! What a 'delicious' ride Bappa planned :)
Btw, I do like Yellow bike :D

Indeed,it was a delicious ride. Thanks ;-)

Looks like it was all worth it in the end :)

Yes, it was a sudden unplanned journey...but alls well that ends well and that too with Tarka-Roti :D And do you wanna exchange your Royal Enfield with my yellow bike.. I have  a soft corner for Enfield :-)

Ha ha ha! You would have to ride to Mumbai for that...I rode to Kolkata in January 2011, wish we would have known each other then :)